We've got another great digi-view comin' your way! I want to continue to showcase many different fashion creators, as well as fashion lovers! I think it's important to help support other creative people so that everyone can continuously create their success. Then, everyone can share success together!

This digi-view is with Creep-P, a music producer who is also known for his amazing make-up and styling looks!

I met Daniel at Tekko 2019, where we both modeled for Ota-Q Apparel in the fashion show!! It was actually so cool that I was able to meet a bunch of great people at Tekko, including Daniel, Callie, and Puvithel! I really hope I can see them all again!

(A photo of all the Ota-Q models at Tekko 2019, including myself on the far left, designer Callie at the bottom left, and Daniel on the far right.)

Music is very important to me. It helps me connect with my body when I dance, but also, it helps me to get creative when I start designing! For me, I combine my love for music and fashion through my fashion shows, where I can express my style and body movement! I was really curious about Daniel's work and how he likes to express his love of music, as well as his sense of style.

First off, I wanted to know more about when Daniel started his music journey!

"I started to make music far back in 2012, with the intention of trying to create a small scene kid duo! That obviously fell through, so then later on, I remembered about something called Vocaloid, due to an ex-best friend! I still remember it that the first song I listened to was Meltdown by iroha. Slowly, when I started making more things about creepypastas, I tried to figure out what my "style" was, which even up until now I haven't fully figured out. Apparently, people can point out what is a Creep-P produced song, but even I... don't get it. As time passed on, I realized what I wanted my sound to be, which is somewhat of chaotic, but something memorable. A lot of my lyrical work (whether it be on my own or be with friends working with me) revolves around specific topics that have been turned into this... horror story almost? Best example is Clown, where people used to make fun of me what I wore, called me scary and/or scaring their kids, so I turned it on them and told them "I'll give you something to be scared about!" As of July 17th though, I retired my vocal synth chapter (for now), as I want to pursue a bit more "campy" and "mature" songs. Which is a mixture of anger, comedy, drugs, and a lot of talk of being a whore openly. So basically, what I reflect on my Twitter account. As for DJing: I always wanted to DJ!! But I was always to shy to do so. But, as of February 2020, that completely changed!! I practiced hardcore, and ended up getting my first gig, thanks to Kaijucore Entertainment and Candy Trap! My dream is to be able to perform at Magfest; whether it be Main Stage or at POSE Nightclub!! It would be so iconic."

Daniel has a very distinctive style. His bold make up looks and colourful fashion mix so well together and really bring out his energy. I really love seeing his looks and styles, as well as his confidence that he shines. I asked him how he likes to mix his passion for music and fashion together.

"I usually mix the two in music videos! A lot of my videos are conceptualized by me, but are fleshed out by animators and artists that I full-on trust and love. They know me well, so to be able to work with these people and get to have these concepts fleshed out is absolutely a dream. The best examples of this are my two songs Animalistic and Clown. Animalistic has an entire neon WORLD built around it, so to be able to create it was amazing. Hell, the necklace the girl is wearing is currently a purchasable thing via Yokai Candy! Which, shout-out to them, I love them so very much. Please give them a lot of love for me at @YokaiCandy on Instagram. Clown takes literal references from clothes I actually have, as well as some of my favorite color palettes, and I made that VERY clear when speaking to the artists and animator. I also currently am in the process of merch that can double as just easily accessible fashion that looks absolutely adorable! " 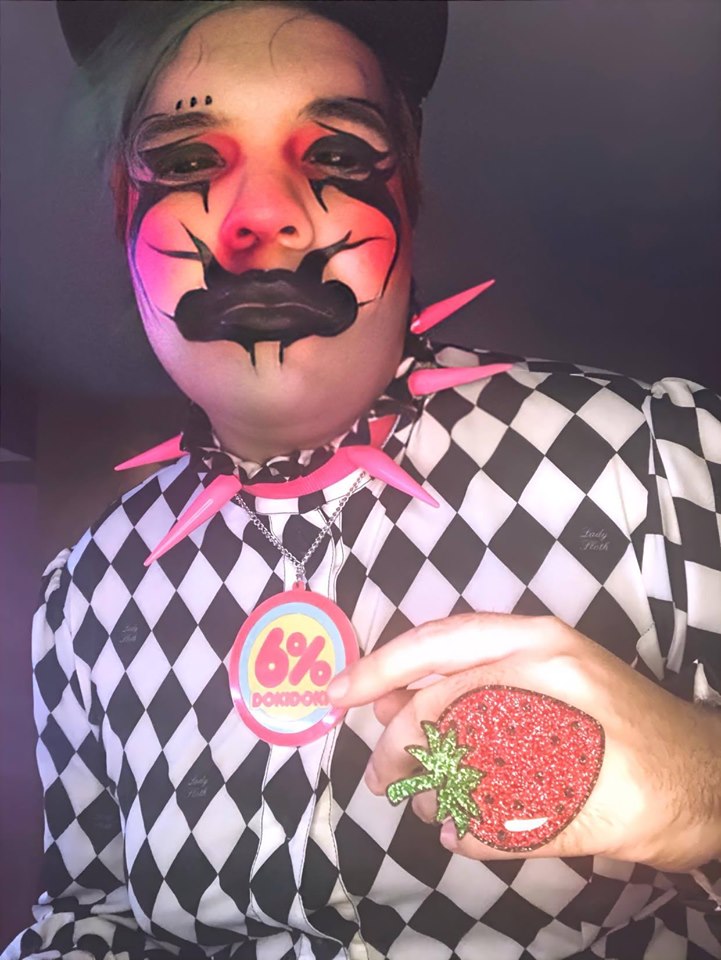 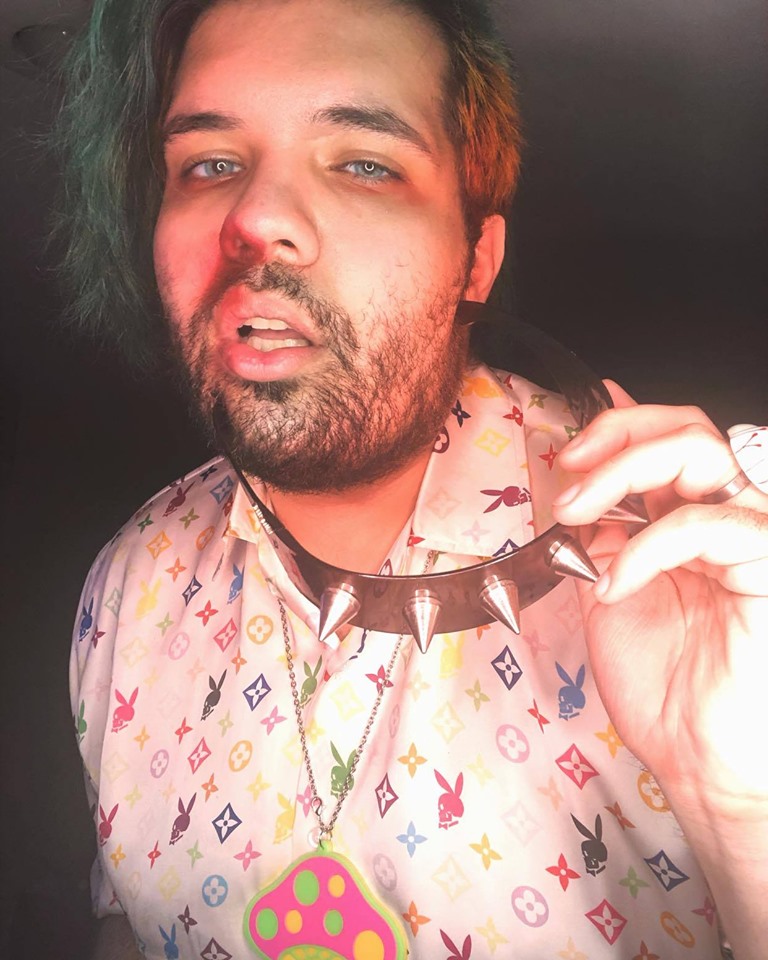 Daniel believes that the most important aspect of fashion is the details. "Hands down, the details can make or break an outfit. If one thing is off, people can tell almost asap! At least, in my opinion. But at the same time, if something is off, but that was the intent, that makes the outfit iconic. It's a weird dilemma I have a lot, in which it's... too much detail, or not enough? Then I realize: not enough doesn't exist. ADD MORE DAMN IT, YOU ONLY LIVE ONCE."

I asked Daniel what is something he is most proud of.

"Honestly? My branding. As stated before, I was never able to create something colorful, thanks to my stature of being this huge dude. But, at 25, and being able to sit there and make this entire little community (mostly) on my own, and show everyone that it's absolutely okay, Hell, iconic even to dress however you want, no matter your size or gender, and to be as loud and as obnoxious as you want to be and still be able to feel comfortable being yourself? AND still be able to keep it true to myself? That might have to be something I'm most proud of. Oh yeah, and being on Hooked on the Look. That was neat too. "

You can check out Daniel's "Hooked on the Look" segment!

Lastly, I asked Daniel what is some things his fans/potential fans can look forward to:

"WEEEEELL. I'm in a pretty good place to announce that I'm working on my cute 2nd album! This album features my vocals, similar to my song R.I.P., which is an absolute vicious and DEADLY track, covered in absolute venom. This album has collaborations out the ass, as well as some cool production from not just me, but from iconic producers. And let's not even forget the iconic as Hell singers on it! They show me up too! And I'm absolutely fine with that! As well as my next single, written by myself and my friend (who, at the time of me writing this, may want to stay anonymous due to privacy reasons), called DOGWALK. It's an absolute B**CH track. It talks about how people try you over and over and it's time to have enough and, well, dogwalk that b**ch. I also have another single (maybe might be the single to fully announce my album entirely? Find out soon!) called VR, which... well, to put it bluntly: is about having sex in VR Chat. It was such a stupid and campy idea I had (which apparently people do?) so I had to bring on the two people I know who can help me do it justice: Michaela Laws and Disko Warp! The production behind it is insane and intense, and the lyrics are crazier. I never knew my mouth could run that fast."

Thanks for answering Daniel! And thank you all for reading. Be sure to check out Creep-P's social networks and YouTube/Soundcloud, and check out our other blog posts on KAWAII INTERVIEWS, events I've attended, and more!